← Why So Critical?
A Reluctant Post about Hobby Lobby →

Why numbers matter, and don’t matter, in the church 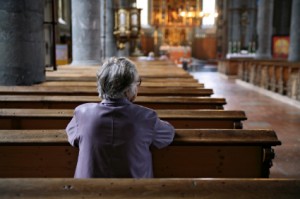 I have a confession to make–I am a pastor and I care how many people show up when we do something together as a church. This is especially true of our weekly worship gatherings. I know, I know, you’re not supposed to care about numbers–it’s shallow and egocentric. But truth be told, most pastors (dare I say all pastors?) care on some level about numbers. This has been true for me since my first gig in a church context, as a young adult pastor in a large church. We met together on Sunday nights and when there were 50 people there I felt great. When there were 15 I figured it was all falling apart. At my current church I face this issue especially during the summer months when our people are often on vacation or exhausted from a long weekend of activity. Sometimes we have a large crowd and other times it feels like a small group.

Ten years have passed from my first job as a pastor until now, and while I still care about numbers, I have had significant time to process and pray about the emotions that numbers inevitably arouse. I think my perspective has become more mature, at least at times. And there are some reflections on the topic I think are worth sharing.

There is a sense in which numbers should matter.

Numbers are not really numbers, they’re people. I’m sure you’ve heard that before, and it might sound cliche, but stick with me. When we have people at our gatherings (or other places where people might see the collective life of the people of God’s kingdom) who are not living life in Jesus, it is something to be celebrated. And the more there are, the bigger the celebration should be. If our motivations are right then we are not celebrating the fact that a room, house, or park is full, but that there are many people hearing and experiencing the kingdom in some way.

And what of the number of people who are already living life in Jesus? Well, if we believe something valuable is happening in the time we gather as a people–something that is drawing us closer to God and shaping us into the kind of community God wants us to be–then we would rightly long for everyone to be there every time we gather. And if we do not believe this then we should just quit gathering completely. People don’t need help wasting time.

In the past ten years I have become profoundly convinced that Jesus longs for the reconciliation of all people to the Father and that the life of the church is a primary way, I think even the primary way, that he has chosen to help people experience his kingdom and the life it extends to all who enter it. In the past two years I have also been challenged on the role of the gathered church for those already living as followers of Jesus. I am increasingly convinced that the gathered life of the church is essential in our formation and witness. It is not the only thing, but it is an important thing. So numbers matter because people matter.

There is a sense in which numbers shouldn’t matter.

As much as pastors might strive against it, it is a difficult thing to gather together with the church only to find that a small percentage of the church is there. I have already discussed the reasons why disappointment can be a right response, but there is no denying that the disappointment often flows from less noble sources. Pastors can invest so much of their identity in how the church is doing that low numbers can be taken as an indictment of the pastor as a person. We internalize what is happening and struggle with it not because of the benefit of people gathering together but because of what we think it says about us. This is egocentrism and it is wrong. Pastors, we must repent when this is our reason for disappointment and discouragement over numbers because it is not about us and our egos. For those who are not pastors, understand that this is a real battle, and even for those of us who understand it is wrong and fight to destroy this line of thinking, it is much harder to eradicate it from our hearts.

By the grace of God I have grown in this area over the past ten years. Especially in that first job I found it nearly impossible to keep numbers from defining me. However, more recently God seems to be allowing me to move past this. I remember one Sunday at my last church when the weather was bad and eleven people showed up on a Sunday morning. In earlier days that would have been debilitating to me. But as God was working in me in this area I was able to adjust, engage God with those eleven people, and be truly moved closer to them and to him. Experiences like that continue to allow me to sever my identity from the numbers and trust God to work whether there are twenty or two hundred.

There are two ways we can make idols out of numbers. The first is what has already been discussed–we use numbers as the measure of our worth–whether as pastors or churches. Instead of rightly giving God glory for the people he draws to himself we celebrate ourselves for the “good work” we’re doing for him. The American Christian culture is no help in this regard. We exalt the churches who grow large and their pastors. They are the ones who write books and speak at conferences. We assume that they are the best examples of the healthy functioning of communities of the kingdom of God, often without deeply exploring what’s happening in those communities. We have fully accepted the American culture of fame into the church. This doesn’t mean those large churches aren’t healthy kingdom communities, only that we very easily and regularly idolize size for the sake of size.

The second idol is somewhat the opposite. We can react so violently to the first idol that we swing entirely the other way and idolize stagnation. We lift up our lack of growth as proof that we don’t idolize numbers. But what is normally behind this idolization of stagnation is comfort and safety (those, in fact, may be the real idols). Interestingly, these are two other deeply entrenched values of American culture (along with fame). We like being small for our own sake, not because it proves something about our faithfulness to Jesus and his kingdom. I do know of churches who are committed to remaining small while seeing the kingdom grow and expand so they are continuously planting churches. That’s great! I really resonate with that approach and see great value in not growing too large, but I hope it is not driven by my own sense of comfort. The kingdom of God expands and grows (like a mustard seed or yeast in dough) and we are all called to be a part of that, whatever the size of our church community.

My hope is that as we are able to value numbers for the right reasons, and not for the wrong ones, we will dispose of either of the idols they can create. With Jesus we will long for the expansion of his kingdom and the reconciliation of people to God because it is part of his restoration of all things. May his kingdom come and his will be done on earth as it is in heaven.

Be better today than yesterday.
View all posts by Big Tasty »

Posted on June 23, 2014, in Uncategorized. Bookmark the permalink. 1 Comment.

← Why So Critical?
A Reluctant Post about Hobby Lobby →