← Jesus in the Church: Something good happened on Sunday
Vague Outlines: The form of preaching →

Abortion, environmentalism, and immigration, oh my! The politics of American religion

Abortion, homosexuality, immigration, environmentalism, capital punishment, war, patriotism, (insert your favorite issue here)—how is it possible for Christians to vary so widely in their perspectives on these issues?  Sure, some of them are more biblically ambiguous than others, but the breadth of passionate opinions among professed Christians is pretty staggering.  While complexity, interpretation of Scripture, and personal experiences have a significant impact on how these issues are approached, there is another factor that is even more powerful—politicized religion.

This is what I grew up with.  I literally didn’t think you could be a Christian and a Democrat until sometime in high school.  There was one man at the local Christian college who was a professed Democrat and it blew my mind.  Republican values are deeply engrained in many Evangelical churches—especially those comprised primarily of Baby Boomers. 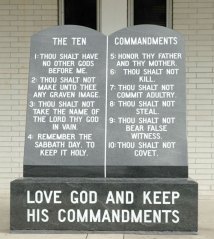 Republican Christians believe (with actions if not official positions) that the United States is or was a Christian nation and that our nation has experienced freedom and financial blessing because of our connection to God.  Because we are God’s nation little we do globally is ever viewed negatively—especially if we have a Republican President.  This also leads to fights for outward signs of devotion to God by our nation like monuments to the Ten Commandments outside courthouses and sanctioned prayer in public schools.

If you are familiar with Republican Christianity you have no trouble articulating the majority views on all the issues I mentioned at the beginning.  Abortion is murder and must be stopped.  Homosexuality is sinful and should not be practiced by Christians.  Immigration (other than the legal kind) is breaking the law, period.  Any movement on this issue is in relation to adjusting laws.  Environmental concerns are overblown and not a big deal.  Capital punishment is a just punishment for certain crimes.  War is unfortunately necessary to maintain our freedom and to flourish as a nation.  Patriotism is expected—it is wrong not to be fiercely loyal to the United States.

If you think I’m being critical of Republican Christians, you’re right, but it’s not because I’m a Democratic Christian. 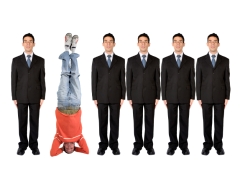 My exposure to Democratic Christianity increased exponentially when I became a pastor in a Mainline denomination.  I had read about this brand of Christianity and had a little exposure to it, but getting involved in the life of the denomination plunged me into it headlong.  All the issues that I had assumed had one Christian response in my younger days (the Republican one) were turned on their head.  The answers to all the difficult issues were nearly the opposite of what I was accustomed to.

In regard to the issues mentioned at the beginning, the perspective of Democratic Christians is opposite of Republican Christians on almost every point.  Abortion is a difficult issue, but women should have authority over their own bodies.  Homosexuality is something that should be celebrated as love in the same way as heterosexuality.  This is articulated with the phrase “open and affirming.”  Immigration is messed up and we need to get laws changed.  We are messing up the environment worse by the day and if we don’t do something soon there will be huge consequences.  Capital punishment is murder and is wrong.  War is almost always wrong and any military action taken by the United States is viewed with suspicion.  Patriotism is dangerous.

Democratic Christianity focuses as morality as tolerance (but really acceptance, not tolerance), the poor and marginalized, and environmentalism.

While the focus on love by Democratic Christians seems more palatable than the focus on strict morality and national religion (at least to me) both sides suffer from a deep defect.  In both Republican and Democratic Christianity important words like justice, love, acceptance, and morality are defined in socio-political ways that may or may not fit with the biblical description of these same words.  And while there are good things about both Republican and Democratic Christianity (they are trying to come from Scripture after all), the approach of both are deeply flawed in the same way.

Political Christianity, whether Republican or Democratic, assumes the truth of certain political positions and then finds ways to affirm these positions through Scripture and theology.  Often the assumption of these social positions is not stated, so both sides appear to be approaching Scripture honestly.  But for each side their worldview is predominantly shaped by the presupposition of the truth of positions on certain issues rather than an honest pursuit of biblical truth wherever that leads.

Aside: It is worth making a couple points here to acknowledge the complexity of this issue.  First, we all have presuppositions we bring to our reading of Scripture.  No one is a tabula rasa, so there will never be a perfect biblical interpretation.  Second, there are principles of biblical interpretation that naturally come into play here.  How much does historical context come into our interpretation?  Is there a redemptive trend on a given issue?  What does it mean for the Bible to be inerrant or infallible or even authoritative?  Even if issues are approached apolitically the conclusions of Christians will vary.

The foundational problem with religious Christianity, from either side, is that it is driven by a political worldview rather than a biblical one.  The very fact that we understand and can picture Republican and Democratic Christians only affirms the depth of the problem.  Political Christianity serves to quarantine certain views on issues—they are not open to challenge or real discussion.  Can you imagine a Republican Christian exploring the impact of biblical hospitality and the theology of the stranger on the issue of immigration?  Can you imagine a Democratic Christian rethinking their view on abortion in light of the theology of the imago dei and God’s sacrificial love for all people?  But these issues have already been decided by a worldview based outside the authority of Scripture.  Even when views are taken that reflect Scripture is often more because the Bible does support a socio-political position than because the view is rooted biblically.

I’m not pretending to have answers to all these issues—what I’m saying is that we all need to look in the mirror and ask whether our worldview is more driven by current American politics or by deeply seeking God’s wisdom through Scripture and the Spirit.  We are supposed to be aliens and strangers here, not Republicans and Democrats.

An Indiana transplant to Colorado.
View all posts by Trevor Lee »

Posted on January 31, 2012, in Uncategorized. Bookmark the permalink. Leave a comment.

← Jesus in the Church: Something good happened on Sunday
Vague Outlines: The form of preaching →